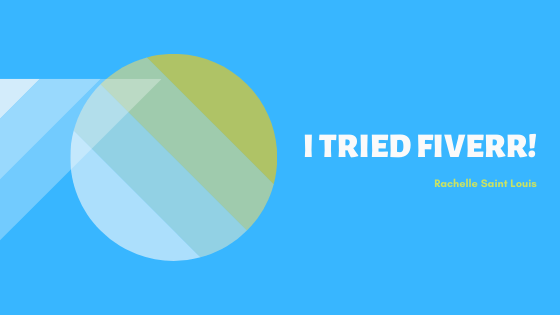 Disclaimer: This is in no way an ad, I just wanted to try something new.

Since school’s been out, I have found myself on Youtube way more than usual. Several side hustle videos keep popping up on my feed, and having nothing else to do for the next three weeks, I keep clicking on them.

I’ve been on a budgeting videos binge lately, so it makes since that these side hustle videos were added to the mix. Usually, they seem to be talking about the same things: babysitting, tutoring, and online surveys that never really get you anywhere. But, these past few were actually kind of helpful.

I’d heard of Fiverr before, on YouTube, of course. I just never really thought about selling my services. While I was waiting to see if anyone would purchase my blogging services, I decided to see just what the site had to offer.

In all honesty, I was pleasantly surprised. I’ve been trying to get a good logo for this blog since before it’s official launch. I ended up getting one on Fiverr in a day. I wish I gave the site a chance sooner, it’s so cool to see all they have to offer.

Here’s the picture I sent to the graphic designer, you might recognize it from my prom post.

Without further ado, here’s the cartoon caricature I got for $5!

Personally, I think it looks pretty cool and the deal was definitely unbeatable. It’s more than likely that I’ll be using Fiverr again in the future.

How do you feel about the cartoon?

Have you tried Fiverr?

What sites should I try out next?

Let me know in the comments, let’s chat!

Rachelle Saint Louis is a Haitian-American writer, born and raised in South Florida. She received a 2018 Silver Medal in the Scholastic Art and Writing Competition for her poem “Red Blood Cell.” She is currently a Psychology and English double major at Florida Atlantic University. Her poetry has been published in Rigorous Magazine. Rachelle has been writing poetry since the 7th grade and you can often find her performing Spoken Word at local open mics. View All Posts

One thought on “I tried out Fiverr!”

Recent Posts: Don't Get it Twisted